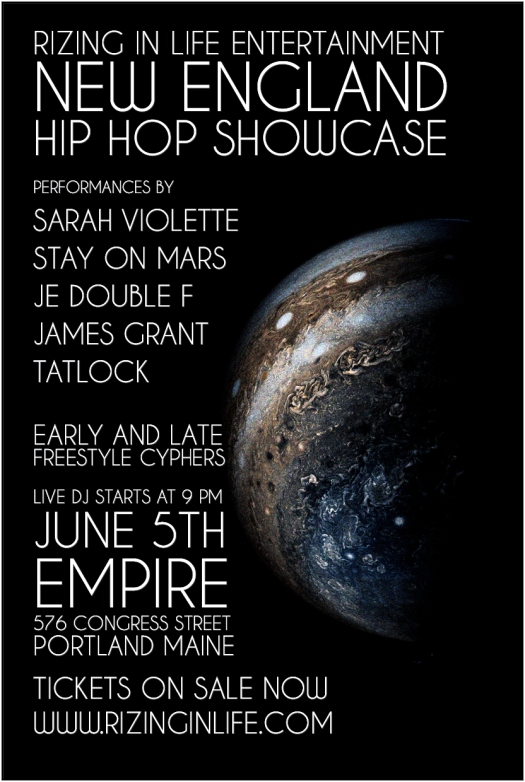 Join us for A New England Hip Hop Showcase at Empire!

Stay On Mars
Stay On Mars is the idiom of an artist who’s either looking for his escape or remains to remind us that our self-created fallacies don’t actually mean shit. A trip hop artist who got his start in the underground Seattle music scene, MARS moved back to New England to establish himself into the music community. Since arriving, he has founded Monday Of The Minds and Rizing In Life Entertainment in Portland, Maine. MARS plans on dropping an album the Autumn of 2017.
www.rizinginlife.com

JE DOUBLE F
Rising out of the pine barrens of southern New Jersey, JE DOUBLE F has made a name for himself with his heavy touring, DIY work ethic and genre-bending punk rap. Hard work, dedication, no frills. Performing in support of his new record HUMAN RITES
–http://music.jedoublef.com/

James Grant Hip Hop
Portland’s resident rapper and producer. The DJ for Flask Lounge’s Monday of the Minds, he will be contributing his unique self-produced beats and songs to the Empire stage.
–https://jamesgranthiphop.com/music

Rizing In Life Entertainment organizes shows all over the city. We are known for the sense of community that brings you out everytime.

Contact us now if you are interested in booking a show in Portland, and need help with the groundwork. We also book talent from all over the country, so get in touch with us for your next tour!